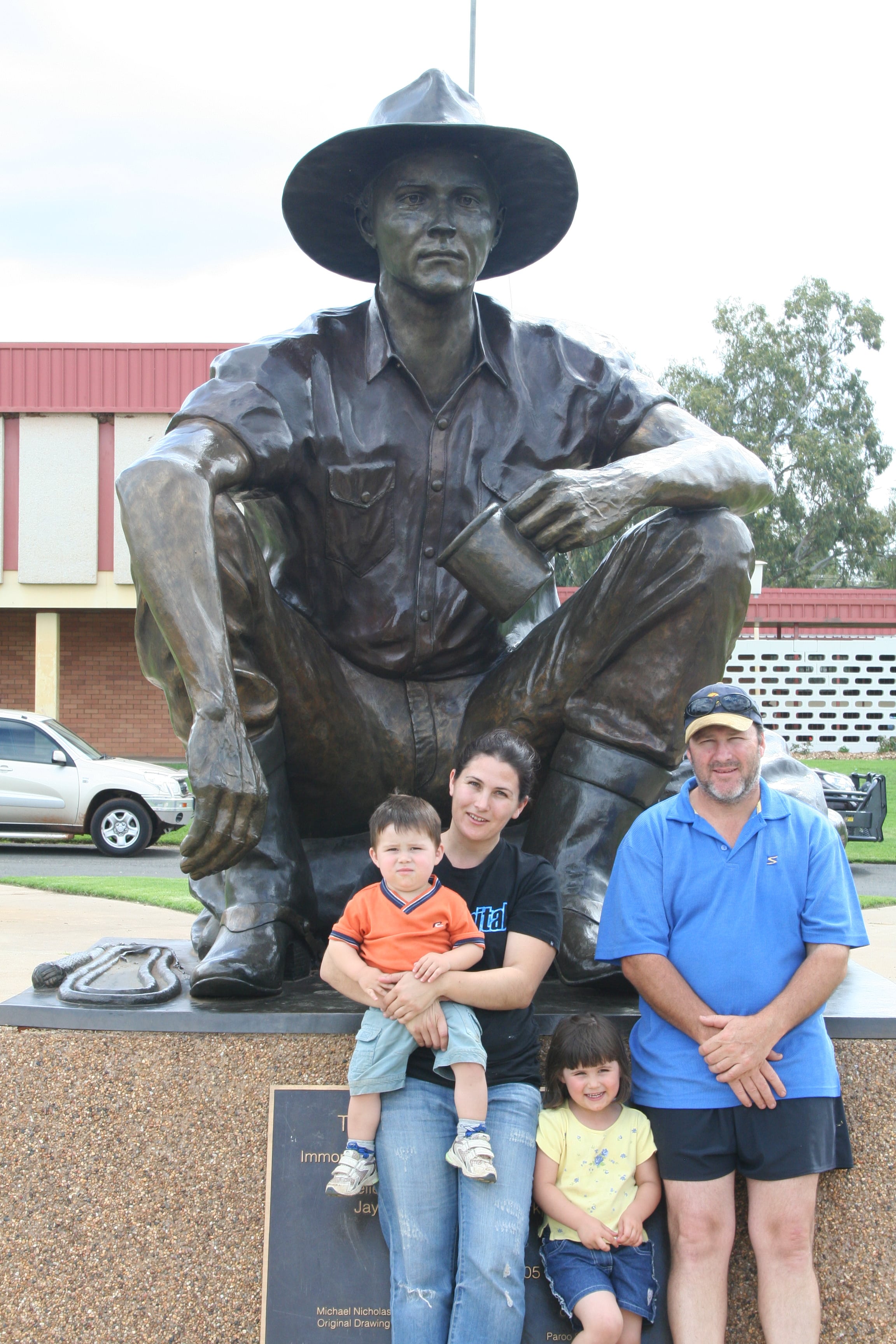 Like life, some trips are all about the journey and not so much the destination. In 2006 we had seen Lake Eyre in the height of the drought that gripped our country and now that we had had some rain we wanted to see it againhowever,every time we set off, the roads got closed. So we devised a plan to head out in that direction and if we couldn’t make it to Lake Eyre by road we would find somewhere to take a flight over it. One way or another, we were going to see it.
After leaving the office on the Queensland coast wetravelled the Cunningham Highwaystopping overnight at Coolmunda Dam near Inglewood before continuing on the next day along the Barwon Highway to camp at Nindigully Pub on the Moonie River. The pub was established in 1864 and from the late 1800’s to the early 1900’s was a Cobb & Co changing station. It is believed to hold one of the longest continual licences in Queensland and after a refreshing drink whilst the kids entertained themselves on the playground we enjoyed a sunset over the picturesque setting.
Just up the road at St George, we discovered the Kapunda Fishing Park on the banks of the Balonne River and as we explored the area, the rain continued to fall however we enjoyed lunch at the Beardmore Dam, fishing at the Jack Taylor Weir and a visit to the St George Heritage Centre during some sunny breaks.After a few days we moved on but did not get very far as we soon discovered a free camp on the Wallam Creek at Bollon. We enjoyed a meal at Debs Cafe and a local tour guide of the Bollon Heritage Centre. After enjoying a few days of the first real sunshine for weeks, we decided to head off along the Balonne Highway.
After enjoying lunch at Cunnamulla,which stands above the world’s largest underground river, we learnt more about at the Artesian Time Tunnel & Museum Heritage Exhibition at the Cunnamulla Fella Centre Art Gallery and Museum. Once we had taken an obligatory photo with the Cunnamulla Fella himself, we made our camp further down the road at Eulo, home of the World Champion Lizard Races, on the banks of the Paroo River. We admired the history at the Eulo Queen pub, sampled the local dates at the date farm and winery and the honey obtained from the local native Yapunyah tree.

We set off from Eulo and stopped for lunch to watch the prolific birdlife at Lake Bindegolly National Park. At Thargomindah we checked out the road conditions with the help of Nathan,a very informative tourist officer, however we were disappointed to find some roads still closed although the road through to Innamincka was still open. We decided to continue on the Adventure Way and took a short side trip to Noccundra which was first settled in 1882 and today has a population of four, but only one permanent resident. Camping overnight on the banks of the Wilson River,we were surprised at the abundance of fish and bird life and whilst the kids enjoyed watching the pelicans feed we had some tasty yabbies.
Travelling the next day we crossed the Cooper Creek channels and found it hard to believe that this was under flood earlier in the year, although the growth of the two metre high vegetation on the sides of the crossing gave an idea of just how much water they had gained.

After calling into one of Australia’s national icons,the Burke and Wills Dig Tree on Nappa Merrie Station,for lunch and after having been in this area four years prior we could not believeit was the same place. The water had definitely changed the landscape. Our drive from here into Innamincka felt like we were on a completely different road than we had traversed before and in some places it actually was as they had sealed a fair bit of this section and there was now only 54km of gravel road between Thargomindah and Innamincka. I felt soon there would be no gravel roads left in the outback!
The desert landscape had transformed with the rain and the wildflowers were in full bloom, the normally red rocky hills and sand dunes were now hidden by green, purple, yellow and whitewildflowers. We were privileged to see the area four years ago at the height of the drought and now in its changed state after the floods.
Innamincka is a favourite place of ours and we enjoyed camping on the Cooper Creek and revisiting places like Policeman’s and Minkie waterholes, and Burkesmemorial plaque, where his body was originally found, however alot of roads were still closed due to the rain. Stopping for a cold one at the Innamincka hotel, we shared an afternoon of drinks and yabbies with friends of ours who also own an OKA and live in the area, before watching a magical sunset. 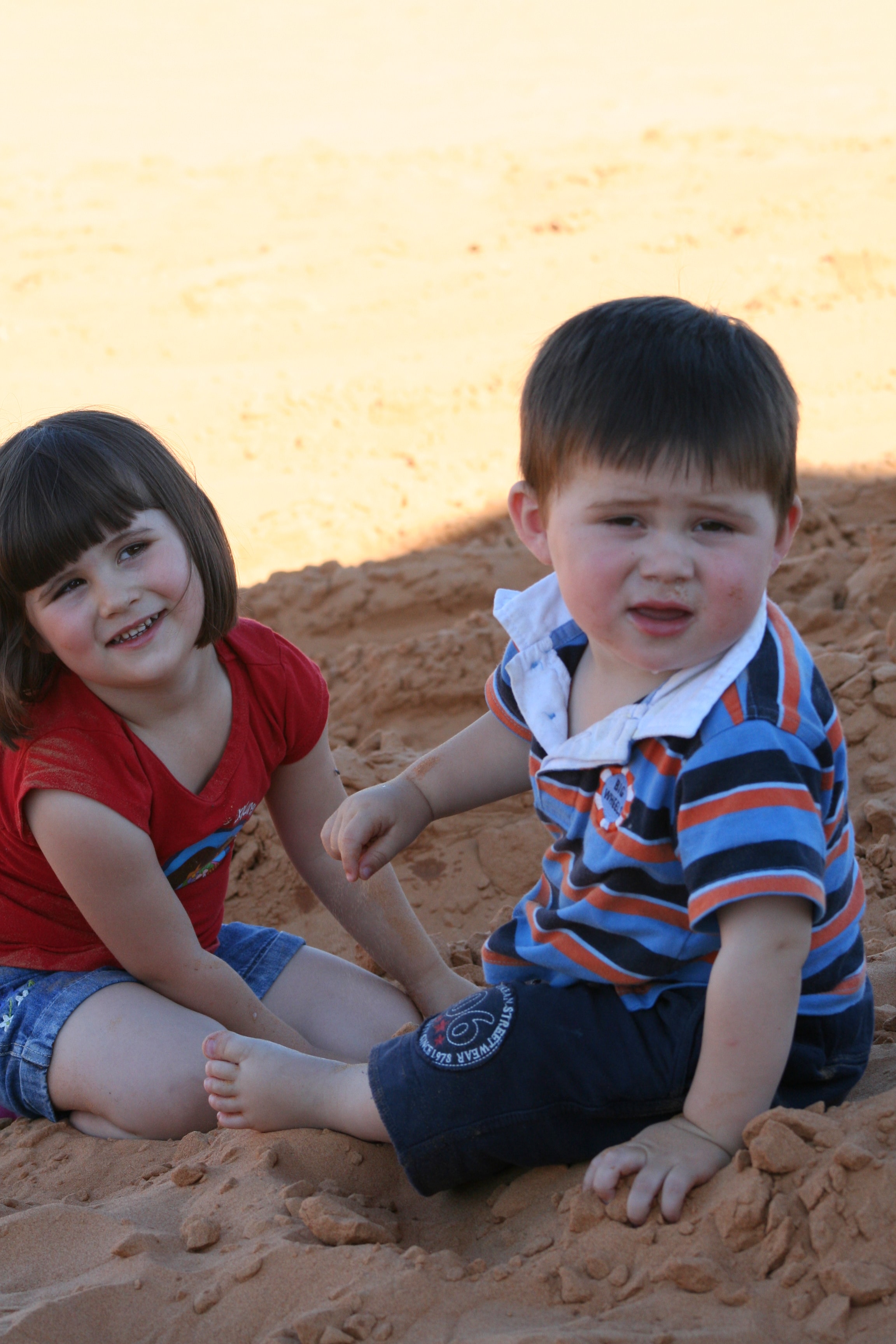 The roads into Lake Eyre were still closed and the Cordillo Downs road leading north was also shut so we decided to head to Birdsville by theArraburyroad to see if we could catch a flight over Lake Eyre from there. After camping overnight close to Haddon’s Corner the next morning we got bogged in the wet mud on our way out to where Queensland and South Australia meet which was a stark contrast to four years prior when we also got bogged but that time in dry sand. It was amazing to see this corner post literally surrounded by water, opposed to our previous visit where it was dry and dusty.
We enjoyed lunch at Deons Lookout and admired the expanse of outback Queensland. Birdsville is located on the Diamantina River and is one of those iconic outback towns that every Australian should experience. After making Birdsville Caravan Park on the banks of the Birdsville Billabong our base weenjoyed a meal and a few drinks at the Birdsville Hotel. We tried our best to get a flight over Lake Eyre, unfortunately we could not get one and decided that we would have to miss out on that experience this year, but made the best of being in the area. 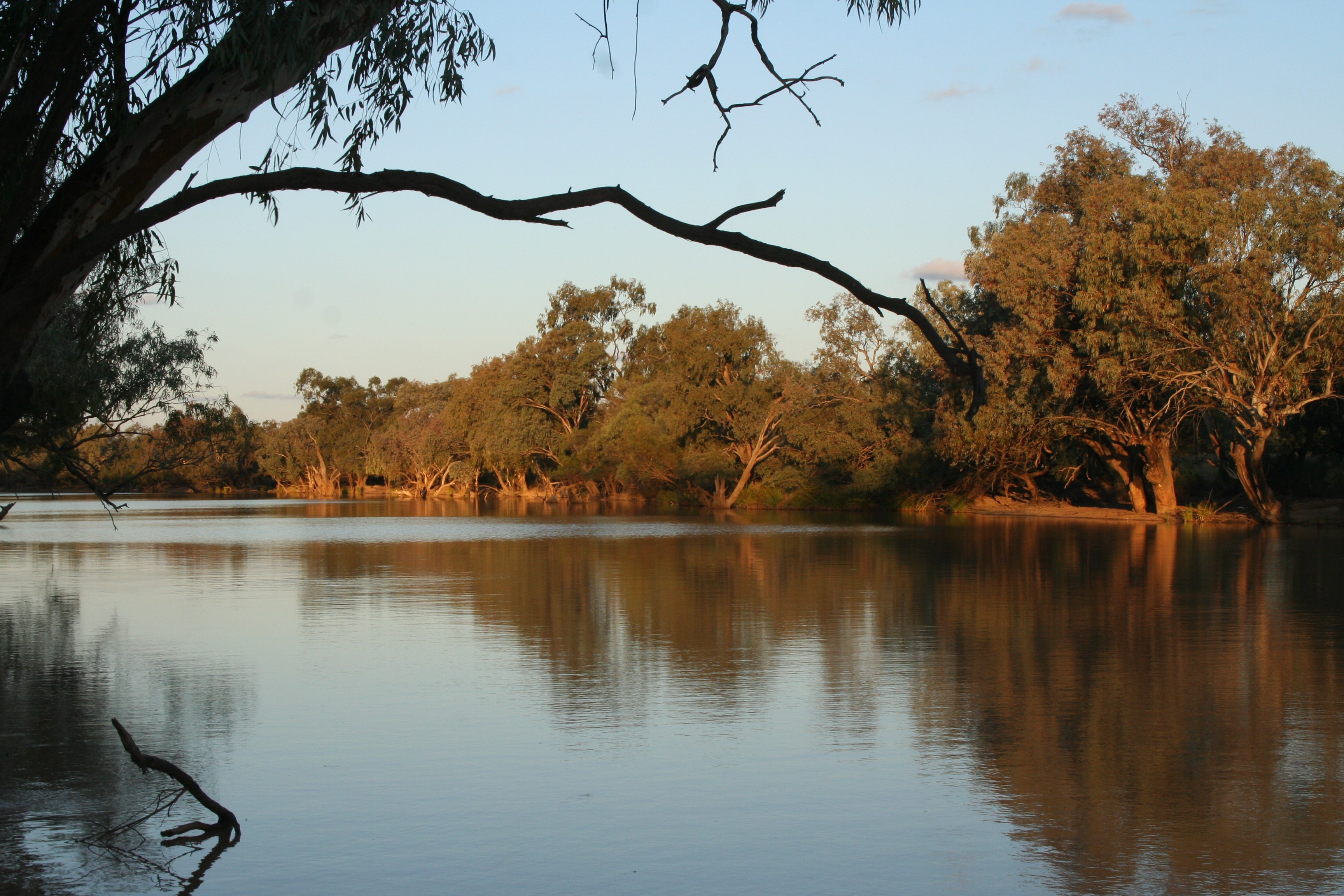 We explored the Birdsville Working Museum, Frontier Australia Inland Mission Hospital, Royal Hotel Ruins, Wirrarri Visitor Information Centre and took a 12 km detour around Lake Nappanerica to the infamous ‘Big Red’ sand dunewhich the OKA tackled with ease. The kids enjoyed playing in Bid Red’s sand whilst we enjoyed a view that not too many get to see with water surrounding both sides.
After admiring the artworkat Birdsville Bakery and enjoy a hearty pie from their selection with names like Curry Camel and Kangaroo and Claret we set off back along the Birdsville Development Road as roads to the north and south were still closed.
After arriving at Windorah late in the afternoon, the sun blazing off the red sand dunes it was still too early in the day for a drink at the Western Star so we stopped in to have a chat with Merv at the servo. Anyone who has ever fuelled up in Windorah would have met Merv and although he cannot see, he changed a tyre on our OKA four years ago with ease. It was nice to see that he was still kicking around and with thatwe decided to drive through the Nature Reserve to camp at Cooper Creek for a few days. The kids enjoyed playing in the water and we enjoyed relaxing on the banks however we had to leave our camp spot earlier than planned as flood water was once again on its way down the creek. 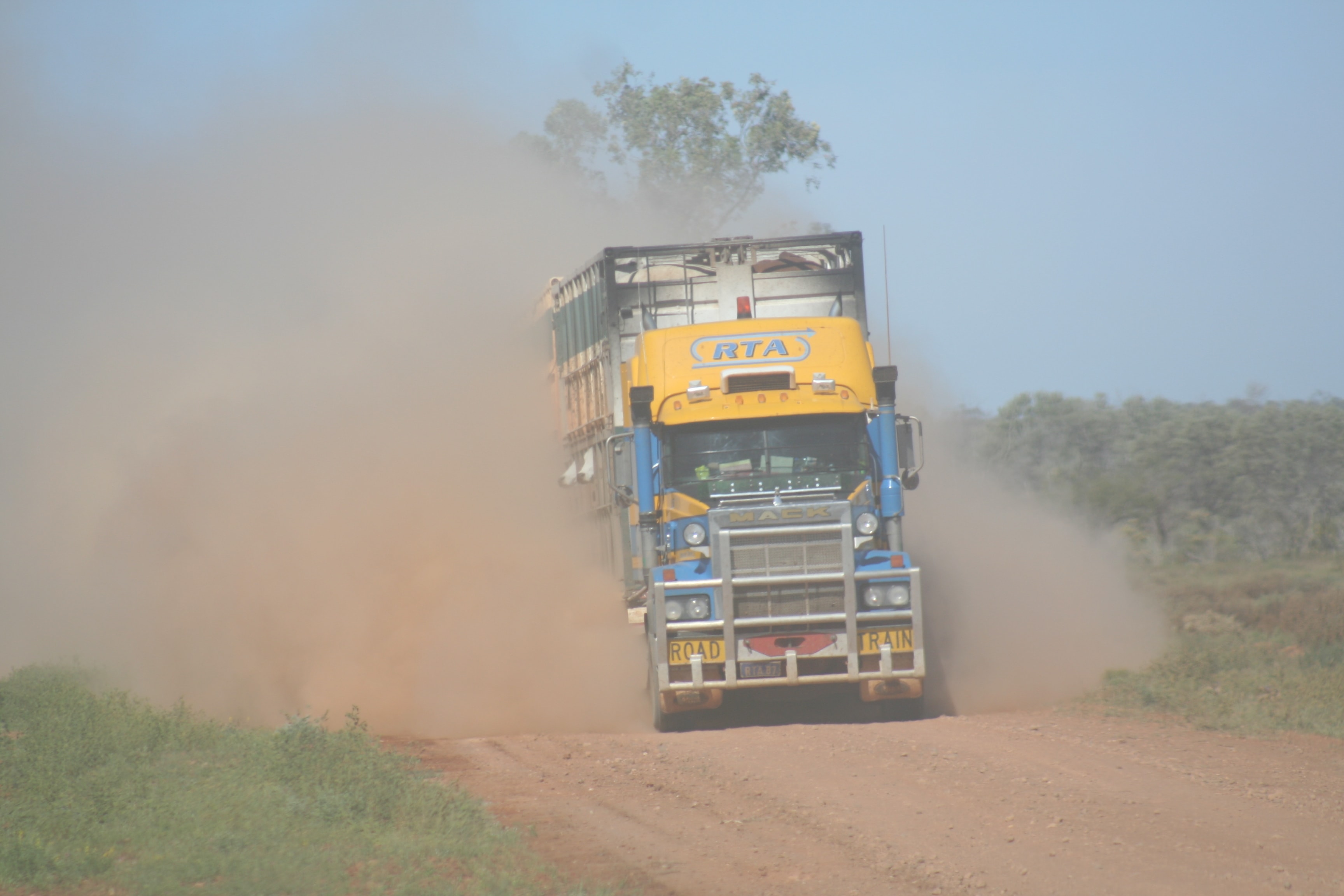 Next stop,Eromanga, the furthest town from the sea, where we visited the Living History Centre and then on to Quilpie, where the kids enjoyed playing on their new playground and we explored the Amy Johnson Airport Terminal before camping at nearby Lake Houdraman where we enjoyedthe ambience of this outback waterhole. From Quilpie we headed south to the Toompine Hotel,the pub with no town,and then made a detour through the Yowah Opal fields before having lunch and moving on through Currawinya National Park where we camped on the banks of the Paroo River.
The following day we headed to Hungerford where we stopped and had a snack at the Hungerford Hotel. A few hours and one flat tyre later we hit Bourke where we found a nice little camp spot at Mays Bend on the Darling River which was rising due to more rain. We visited the Back O’ Bourke Gallery, the working commercial gallery of resident Jenny Greentree and where other Bourke artists are also represented giving visitors an opportunity to see Bourke through the visual arts, truly inspiring.
We were on the home stretch now and although this journey did not take us to our planned destination of Lake Eyre it had taken us to some amazing places we didnot plan on and had shown us the many changing faces of outback Australia. 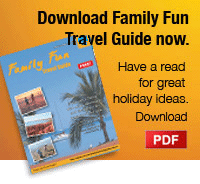 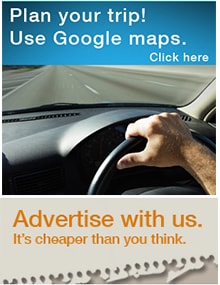